Those of us who read serious papers and magazines cannot have missed the fact that, in spite of progress being made on all kinds of fronts, women rarely represent more than a third of those pictured. And if they are represented in those pages, they are often portrayed as side-kicks or props instead of as actors in their own right or mistresses of their destiny. White men in suit and tie, apparently, are half of what the real world is about. The other half seems to be about men doing sports. Depicting real women seems of little concern.

When we take fashion pictures and mass scenes away (mind you: pictures showing only men will nonetheless be described as showing ‘people’), women in serious papers and magazines represent a tiny slice of power at most and when they do, they are represented in a most colourless way. Now of course, Chancellor Merkel and Ms Lagarde may choose to project that image but even with them, many comments will still dwell on the way they dress, their hairdos or other physique-related items, or express some sort of surprise that these women are good at what they do.

Stock photos, the images many of us use for publications, presentations and websites, are even worse. Ever since they became available, they have shown women in a stereotypical, clichéd or objectified way. Apparently, cars or tools cannot be shown without female nudity and secretarial power is represented by boxing gloves. Women in business are humourless beings in grey or marine suits, carrying laptop cases or staring intently at a note-pad. Climbing ladders is the absolute max of pursuing ambitions, while glasses are often added to convey a message of seriousness that women, obviously, lack otherwise.

Last year much-vilified – and often for good reasons – Sheryl Sandberg has started something that actually might help us here. Getty Images, in partnership with LeanIn.org, launched the Lean In Collection last year. It makes a serious attempt to feature women and girls in contemporary work and life situations, with more diversity, colour and humour than we have ever seen. Even if the collection still seems a bit white- and young-biased at the moment, it may enable us to show a broader range of what real women are and do, and we thank them for it. 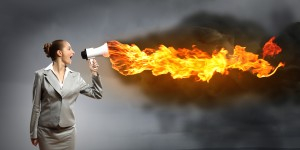